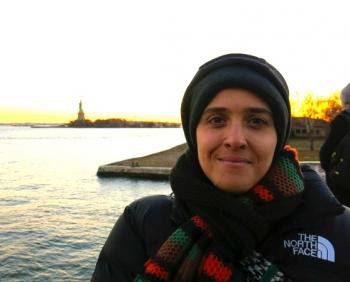 After having shared two separate lunches with two delightful students from the Class of 2000, it would seem that Robert Frost’s poem about roads not taken symbolising missed opportunities does not apply to them. Both Kate Glover and Amy Coopes have already walked down a number of roads and seem energised by life’s multiple choices. I must also disclose that both Kate and Amy were in my 3 Unit English class when we studied the poetry of Yeats, a wonderful experience that we all three regard with deep nostalgia.

Kate went from school to university where she specialised in Psychology and English, two of her great loves. However, when she graduated, she enrolled in a short course in film making. She looks back on that course as not being particularly inspiring but its chaos prepared her for the world of film making where many kinds of chaos happen all the time. In 2014 Kate lives in London, although she came back in December, 2013, to check that the water at Bondi was still as refreshing as it always has been and to check in with friends and family. She also has her own page on IMDb which lists a wonderfully varied resume linked with the nine films she has already released: producer, production manager, and director. Her great interest is the horror genre and she has been featured in a number of online articles about female directors who have specialised in horror film making. My personal favourite is a film called Schooner of Blood which is set in an Australian pub. The film was renamed as Slaughtered for international horror aficionados

To exemplify her range she also makes documentaries. One that is a work in progress is a series of interviews with female poets of the 1960’s Beat generation. I was ashamed to admit, as a child of the 60’s; I did not even KNOW such women existed, thus demonstrating the sexism of those times of apparent liberation. Kate also impressed this old English teacher by mentioning her conversations with Martin Amis.

What is so impressive about Kate is her determination to follow her dream, despite all the difficulties and challenges, both financial and artistic. Creative endeavours require resilience and stubbornness and Kate Glover seems to have developed both these qualities. She is also enthusiastic about mentoring Vinnies girls and has agreed to be the international component of the judging panel for the annual College film festival, Snippets. Kate’s advice to all those longing to have a life in film: “Don’t talk about making films; just do it!”

On a different beautiful January day, Amy and I met for lunch. She was somewhat apprehensive because she had applied for admission to Medicine and was reflecting on the interview she had experienced as part of the selection process.

What was interesting about this application is that this is a completely different road for Amy who has a degree in communications from Charles Sturt University in Bathurst. For the past ten years she has been a journalist and when we met, was a foreign correspondent for Agence France Presse. I thought such a qualification would make her an excellent medico but she had to wait until university offers were published.

Amy’s family has always been involved with social justice activities. I still remember with admiration the letter Amy wrote to the principal of another school when she was in Year 12 because she was outraged about the unfairness of a particular netball game. She was always courageous in speaking out about injustice. I was deeply impressed by her describing the time when she took five months’ leave from journalism to volunteer in a Masai village in Tanzania. Anyone who has visited a Masai village even for a few hours knows that such places require enormous energy and determination, some of Amy’s most outstanding qualities.

The result of Amy’s application was revealed a few weeks later: she received four offers from the four universities to which she applied AND she was also granted a scholarship which will make her new path a little easier to navigate. I applaud the committee’s wisdom in recognising qualities which will make her an excellent doctor: varied life experiences, wide travelling and endless compassion, quickly followed by action.

Like Kate, Amy was happy to be involved in mentoring any Vinnies girl who feels she would benefit from her expertise.

The collective wisdom of both women is that the paths which we travel change over time. They also advise girls not to be too concerned if they are unsure about a career path. An undergraduate degree is often an excellent way to clarify one’s ambitions. As well, the beginning of each career may not necessarily also be the ending. Follow a passion and realise that learning does not stop after the HSC or even the first degree but continues throughout any life.

Someone asked me the other day if I had regrets or ever reflected upon things I didn’t do but wish I had and it was nice to be able to say that I had never wanted to do something without trying to do it. That’s how I came to accept that I’m not a novelist (at least not right now) after writing a novella in my Masters in Creative Writing and realising I don’t quite have the stamina.

If you’re unhappy in life, make a change. If you believe you have more to give, open yourself to new possibilities. For me, I’ve also never stopped being grateful for what at the time I may have taken for granted – the privilege of an excellent education that taught me to think critically about the world and made me believe women and can do everything.