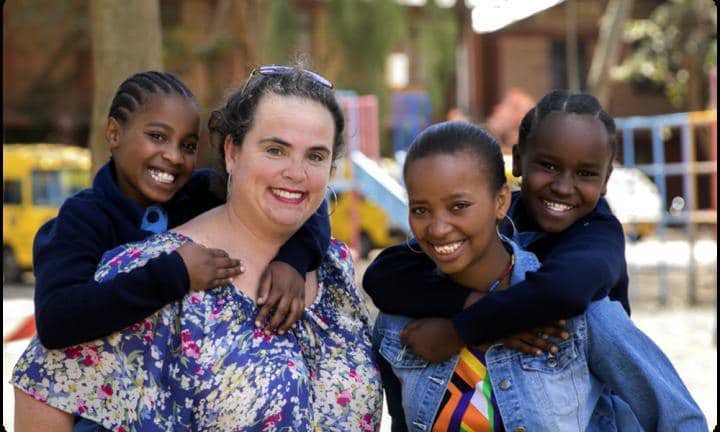 Gemma Sisia spent her early years on a wool sheep property just outside Guyra in northern New South Wales, Australia. She is the only daughter among the eight children of Sue and Basil Rice. Gemma’s mother still lives on the family property at Guyra, and a number of her brothers live in the area. After completing her secondary studies at St Vincent’s College in Sydney, Gemma decided to pursue a Science Degree (majoring in Genetics and Biochemistry) at Melbourne University, and then an Honours Program (where she was awarded First Class) in the Northern Territory. Gemma concluded her tertiary studies with a Diploma of Education through the University of New England in Armidale.

At 22 years old, with a passion and zeal inherited from her ancestor, Edmund Rice (founder of the Christian Brothers movement), Gemma devoted some time to helping the poor in Africa. She travelled to Uganda, East Africa to work for three years as a volunteer teacher. This experience led to a fervent belief that a free, high-quality education should be the right of all children in the world, and that education is the strongest weapon in the fight against poverty, corruption and political instability.

Upon returning to Australia, Gemma began fundraising to help underprivileged children in Uganda complete their schooling. Overwhelmed with support and donations, Gemma raised a significant amount of money, enough so that she started an official fund to invest in the education of East Africa’s poorest children. After realizing that the funds weren’t being distributed properly, Gemma took matters into her own hands and returned to East Africa to manage the money herself.

When working in Uganda, Gemma had gone on holiday to neighbouring Tanzania, where she met Richard Sisia, a safari driver, who would later become her husband. The gift of a small plot of land in Arusha, Tanzania from her father in-law, Daniel Sisia, the village Chairman, was where The School of St Jude would be built, to help the poorest children receive an education. The couple settled in Moshono village in Arusha so Gemma could run the school.

In 2002, The School of St Jude opened with only a handful of sponsored students. Through hard work and determination, the school has expanded to over 1,900 students–across three campuses that include boarding facilities–where over 95% receive a free, high-quality education at the primary and secondary levels.

Support comes from sponsorship from individuals, families, service clubs and schools all around the world. St Jude’s also provides employment to over 350 local Tanzanian staff, including three sets of local Headmasters and their academic teams, ensuring the aim of a sustainable and selfdetermining future remains on track for St Jude’s in Tanzania.

In 2000, Gemma was awarded a Sapphire Paul Harris Fellow by Rotary International. Gemma’s autobiography, St Jude’s, was published by Pan Macmillian Australia in 2007 and remained on the Best Sellers List for over two months.

Also in 2007, Gemma’s achievements were honoured by an Order of Australia medal. Gemma’s story has been featured twice in the ABC TV documentary program Australian Story, in 2005 and a follow-up in 2009.

In 2012 Gemma was named one of The Australian Financial Review and Westpac’s 100 Women of Influence, nominated in the Global category. She was also a finalist in New South Wales for Australian of the Year.